The Ikorodu Bois just may have gotten that big Hollywood break!

Nigerian social media sensation, The Ikorodu Bois have received yet another international recognition following their remake of the Russo Brothers’ ‘Extraction 2’ trailer.

In a now trending tweet, the Russo brothers expressed their excitement at the remake and officially invited the comedy trio to the world premiere of their Netflix action film sequel.

This won’t be the first time that the creative crew will be getting some Hollywood star attention. Months back, the boys caught the attention of Will Smith after they recreated the ‘Bad Boys Forever’ trailer. Other stars like Dwayne Johnson and Lebron James have also shown the boys some love in recent times.

This is awesome! We would love to have you guys at the #Extraction 2 premiere…DM us and we’ll get you there! https://t.co/6eufmJMgT7 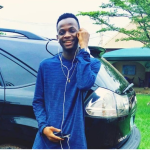 Chioma replies the rumour about her and Davido

Jaywon And 178 Others Arrested For Violating Covid-19 Curfew

This website uses cookies to improve your experience. We'll assume you're ok with this, but you can opt-out if you wish. Accept Read More